You set all of these big, amazing goals for yourself. And then you work hard to make them happen, right?

But for some reason, it just doesn’t work out. Despite your best efforts, you fall short of your goals.

Not only that, but it happens over and over. Why is there so much resistance built up between you and the things you want to achieve in your life? And why does everyone else seem to reach their goals so effortlessly?

Well, the answer lies in your mindset.

Why You Haven’t Reached Your Goals Yet

If you’re blocking yourself in some way or another, you simply can’t accomplish goals. There will always be something that’s standing in your way. And it’s going to leave you feeling stressed out and just wanting to give up hope when you don’t see the results you want. So, wouldn’t it be nice if you could transform the way you think to prevent your mindset from getting in your way again?

Of course! That’s why I’m going to share the biggest reason why you haven’t reached your goals yet. Never again will you have to frustratingly ask yourself, “What can’t I reach my goals?” Because you’re going to have the tools to attract exactly what you want into your life.

So, what’s the secret? It’s actually embodying the version of yourself who already has everything you want. Because right now, there’s a disconnect between who you are and who you need to become. And when you can make that shift, incredible things will start to happen in your life. Here’s how you do that.

After all, visualization is a key element to manifesting the life you’ve been craving. But here’s how this works… You need to imagine that moment in which you realize that you’ve reached your goal. How will you know when you’ve finally got that thing you’ve been working towards? (P.S. I love journaling to help me visualize.)

Maybe it’s a financial goal that you want to achieve. How would you know you’ve hit that goal? Checking your bank account balance, perhaps? Maybe  seeing PayPal notifications coming through to your phone? Okay, put yourself in that picture. And tap into the feeling of being in that moment. And that’s where we go into our next step…

2. Identify the Differences Between Future You & Current You

Listen, you’re an amazing person as you are right now. You are so capable of achieving anything you want. But there’s no denying that there are differences between the person you are right now and the person you need to become in order to reach your goals. And that’s why you haven’t reached your goals. When you think about the version of you who already has everything you want, what is she like?

Consider the kind of person she is. What does she believe to be true about herself? What are some of her daily, non-negotiable habits? Who does she surround herself with? How does she spend her free time? Even imagine the kind of clothes she would wear on a daily basis!

All of these things matter as you create this image of the person you need to become if you want your goals to be a done deal.

3. Embody the Version of You Who Already Has What You Want

When you begin to act as if you have reached your desired goal, you become an energetic match for it. You vibrate on the same energetic frequency as whatever it is that you want. And from there, the Universe has no choice but to deliver what you want.

But how do you live your life feeling as though you’ve met your goals when you actually haven’t? Go back to step two and think about the differences between who you are right now and who you need to become. Then, start making the changes to become more like this next-level, goal achieving version of yourself. Whenever contradictory negative beliefs come up, shut them down. Incorporate some of her habits into your daily life. Begin to dress yourself and do your hair and makeup like she does. Anything to step into her energy now!

Odds are, you’ve haven’t been doing this and this is why you haven’t reached your goals yet. So, the next time you start feeling like you just can’t accomplish goals you set out to achieve, remind yourself to make that shift. Shift into the version of you who already has the things you’re just dreaming about. And they’ll be able to effortlessly find their way to you.

The version of you who has reached all of your wildest dreams doesn’t have the limiting beliefs that are currently holding you back.

She’s done the inner work to kick that negativity to the curb. Which is something I can help you with through one-on-one coaching, by the way. 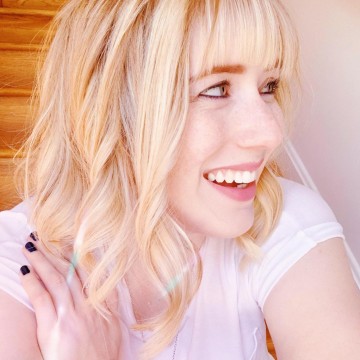